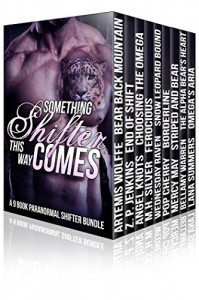 
REVIEW
All of the stories are sweet, short, hot m/m shifters. I am leaving a written review for the following books in the story. All were well written although quite a few need more editing. 4 Stars.


Bear Back Mountain - Artemis Wolffe
Alexander is a physical trainer. His receptionist is constantly trying to hook him up.
Hunter is a bear shifter who needs to find his mate. So his first start of doing that is getting back in shape.
Alex has really vivid dreams of Hunter and finds his eyes in the dream to be very weird.
Finally after getting to know each other a little Hunter lets Alex know he is a shifter.
There is just one problem. A female named Jessica.
Then sickness starts and Peggy teases that he is likely pregnant. Alex finds it all funny but will he after he does this test?
This couple is hilarious as is the story but oh so hot also. Very well written although short it was a nice story.

End of Shift - Z.P. Jenkins
Andrew had been seeing Nick but then when things start to heat up everything that could go wrong does.
Nick unbeknown to Andrew is a wolf shifter but much more .
While driving back to his folks for holiday break Andrew wrecks and ends up in the house and hands of Victor.
What will Andrew do with a bear shifter? And how will Nick handle things?
Can Victor save Andrew?
This is a really well written short story. We get some mystery, action and a whole lotta hotness.


Choosing the Omega - Angel Knots
Everything in Colin’s life had always been hard considering he was orphaned and was sent to foster homes all his life. However he managed to graduate with top honors determined to make something of his life. But on the morning of his last exam all things go to hell in a hand basket. Although never really needing a release even at the ripe old age of 22 all of sudden he couldn't even get out of bed. Colin finally headed to the doctor to see what was wrong and next thing he knows he is on a plane with a colonel heading to someone’s pack? Someone named Hart.
Someone who is to test him but Colin isn't sure what he is being tested on and he doesn't want to be sent back home.
Upon meeting lieutenant Hart it all clicked into place. He wrapped Colin in his arms and rushed him back to the barracks. Ben now gets the pleasures of telling Colin what he is and what everything means.
I enjoyed this story. Everything was good as far as story line and characters. But finding out about Colin and why certain things happened to him I would have liked more reason or details.


Ferocious - M.H. Silver
This one is a really short but hot shifter story. It has a romance span of 10 years so nothing was fast about this couple.


Snow Leopard Bound - Wednesday Raven
Brock was tired of being cheated on. He wants something more than a random fling. Brock and his bestfriend make a wager. Now can he keep what he wagered? Chance was living life as if he was dying tomorrow which wasn't to far fetched. What happens when these two men meet is romantic to say the least. Very heartbreaking and overwhelmingly sweet.
Not a bad story but it needs more editing.

I was gifted a copy of this book for my honest review.